Bright and friendly – Then as now 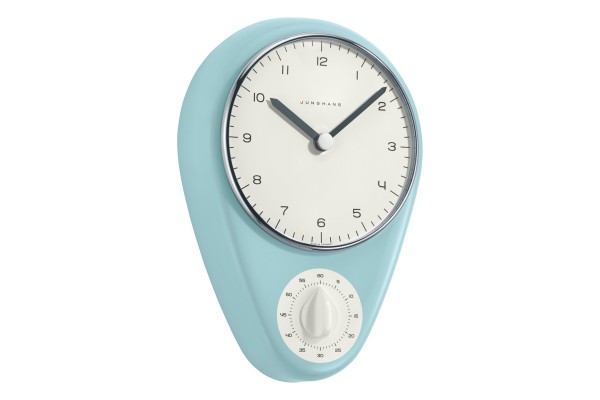 Horological technology in its most beautiful form – the designers at Junghans, back then still referred to as architects of time, have been engrossed in this objective since the 1920s. To expand upon their own internal design expertise, the Black Forest-based company turned to Bauhaus artist and product designer Max Bill in 1956, who, as he was later to note, had “a soft spot for clocks and watches”. Bill agreed to this collaboration “with the greatest of pleasure”, and with the Küchenuhr created his first timepiece for the watch manufacturer. To this day, the design classic remains a desirable and much sought-after collector’s item, and Junghans has therefore decided to reissue the clock for the modern market – true to its original colour, form and material.

The new edition features identical details to the kitchen clock from 1956, created by Max Bill together with his students at the Academy of Design in Ulm based on a drawing of his “ideal clock”. As with all of the artist and product designer’s achievements, the kitchen clock stands out with its striking combination of functionality and aesthetics. Each and every element is arranged with meticulous consideration of its practical value and benefits in everyday use, as Max Bill would later recount most vividly:

“It was very clear: the piece had to feature numerals. The hours on the minute track – and the minute markers on the timer. Why? The kitchen clock is usually the only wall clock in the household. From this, children are introduced to the concept of time, they learn how to read their first numbers and how hours and days are arranged, and it should be bright and cheerful, like beautiful kitchenware.“

And now six decades later, the design has not lost the merest hint of its aesthetics and clarity. The light blue glazed ceramic case of the kitchen clock, which is lovingly handcrafted in a majolica manufactory in Baden-Württemberg, still shines just as friendly today as it did in 1956.  Set inside the casing and framed by a chromed bezel, the white dial is extremely easy to read due to its unambiguous layout and the typography developed by Max Bill. The hands follow the minute track and hour markers with utmost precision, bringing order to each respective day as the designer intended – then as now.

A mechanical timer in the lower section of the tapered ceramic housing allows the user to precisely monitor cooking and baking times up to 60 minutes. At the end of the set time, the timer sounds a charming chime reminiscent of the 1950s. Produced initially in a mechanical version, and shortly thereafter an electric variant, this contemporary kitchen clock is available with either quartz or radio-controlled movement.

This new edition of the Küchenuhr represents the long-awaited recommencement of one of the most significant chapters in the long-term collaboration between Uhrenfabrik Junghans and Max Bill. 65 years after its introduction, this design icon is back – precisely so bright and friendly today as ever.